Every adult loses muscle mass with age.1 This is not just a cosmetic issue. Age-related muscle loss increases the risk for falls, fractures, loss of independence, and ultimately, loss of life.


This decline in muscle mass, which begins as early as the 4th decade, is called sarcopenia.2 It leads to increased nursing home placement and hospitalization rates.3 And as muscle mass falls, the risk of disability greatly increases.4,5

Exercise can help prevent age-related muscle loss, but is only one of the components necessary to maintain adequate muscle strength.

Two key nutrients have been shown to rebuild lost muscle in aging individuals:

Beta-hydroxy beta-methylbutyrate (HMB) increases and preserves muscle mass in adults of all ages, especially those older than 65.6-8

Vitamin D3 supports muscle strength and helps to prevent the falls that often trigger an early decline into frailty.9-12

HMB and vitamin D3 help maintain and restore muscle mass even as we age.

WHAT YOU NEED TO KNOW

Why Sarcopenia is So Dangerous 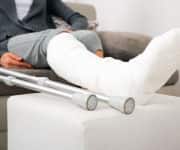 This drastic decline leaves individuals not only weaker, but also in less control of their bodies—and more prone to falls and other injuries.

The word for this loss of skeletal muscle mass is sarcopenia.

Sarcopenia triggers a vicious cycle, in which decreased muscle strength limits physical activity, which leads to further muscle loss. Eventually, a condition called frailty can set in, leaving a person weak and vulnerable to external stressors that would otherwise be minor (such as a mild injury or illness).

As frailty worsens and function declines, each subsequent stressor speeds the road to lost independence and increases the risk of early death.

As we'll now see, clinical evidence supports HMB and vitamin D3 supplementation as a way of heading off sarcopenia and frailty.

THE DANGERS OF INACTIVITY

The impact of inactivity on muscle mass is severe.

In a group of otherwise healthy study subjects, there was a striking 4.4 pound loss of lean body mass after only 10 days of complete bed rest.

The arm of this study supplementing with an amino acid metabolite lost only 0.37 pounds of muscle when confined to bed for 10 days.23

This study reveals how quickly muscle loss occurs and how to prevent it.

Beta-hydroxy beta-methylbutyrate, or HMB, is a natural, bioactive product of metabolism of the amino acid leucine.13

HMB is essential to maintaining the balance between muscle catabolism (breakdown) and anabolism (buildup or restoration).14-20

HMB levels decline with age, a drop that correlates precisely with diminished lean muscle mass and strength.21 This finding leads to an important question: Can supplementing with HMB protect—or even restore—lean muscle mass in older people?

Multiple human trials have shown the value of HMB for preserving and improving muscle mass.

Overcoming a Major Cause of Sarcopenia

A 2015 meta-analysis included data from seven trials involving a total of 287 older adults. It found that supplementing with HMB preserved muscle mass in older adults and may be useful in preventing muscle atrophy.22

One of those studies involved healthy older adults who voluntarily subjected themselves to 10 days of complete bed rest23—a known cause of sarcopenia.24,25

Subjects supplemented with either a placebo powder or a powder providing 1.5 grams of HMB twice daily, starting five days prior to the bed-rest period and continuing until the end of the rehabilitation phase.

The control group experienced a reduction in total lean body mass of about 4.4 pounds. In contrast, HMB-supplemented subjects lost just 0.37 pounds(not a significant difference from baseline).23

In this study, HMB supplementation preserved lean body mass in the face of a powerful stimulus for sarcopenia: sustained bed rest.

Other researchers set out to determine if HMB could help boost lean body mass when used in addition to resistance training.

For the study, a group of 70-year-old individuals participated in a resistance training exercise program five days a week. During that time, they took 1 gramof HMB or placebo three times a day.6

After eight weeks, the supplemented subjects experienced an increase in lean body mass of 1.76 pounds, while the placebo recipients lost 0.44 pounds—despite the fact that they were exercising five days a week! Those who supplemented with HMB also lost more body fat than the placebo subjects.

This study showed that HMB supplementation can augment strength training in older adults in a way similar to that already proven in younger people.6

Vitamin D3 can complement that action by enhancing muscle strength.

A muscle strength/frailty study enrolled 160 postmenopausal women, aged 50-65, who all had a history of falling.28 Falls are a common destabilizing factor that can arise from both inadequate muscle mass and poor coordination and balance.29 Vitamin D3 shows promise for combatting both factors.

Researchers in this study randomly assigned women to receive vitamin D3 (1,000 IU/day) or placebo.28 After nine months, those who took the vitamin D experienced a 25.3% increase in leg muscle strength.28 During the same period, women in the placebo group lost 6.8% of their lean mass.

The vast difference between the supplemented and unsupplemented women indicates vitamin D's ability to not only preserve—but also improve—muscle strength.

Finally, a 2014 meta-analysis of data from 30 randomized controlled trials involving more than 5,600 people evaluated the effects of vitamin D3 supplementation on muscle performance. The results showed that vitamin D3 had a significant positive effect on overall muscle strength. This is an important finding, since loss of overall muscle strength can increase the risk of mortality.26

The greatest benefits were seen in those who had the lowest vitamin D levels at the beginning of the study (less than 12 ng/mL) and in older vs. younger subjects.26 This is good news for those already supplementing with higher-dose vitamin D3.

Recent research has found that age-related loss of muscle strength cannot be explained by changes in muscle alone.36 Deterioration of the nervous system likely also contributes to the symptoms of sarcopenia.

The nervous system is critically important for the control of muscular contraction, from the initial planning of movements to the signals that directly activate muscles. Several of these regions involved in control of movement undergo deterioration with age.36

For instance, structures in the brain involved in motor planning, initiation, and coordination all demonstrate significant functional decline in the aging process. Likewise, the connections of nerve cells that directly activate muscles undergo changes that negatively affect motor function.

Fortunately, new studies have begun to demonstrate that nutritional factors may ameliorate loss of function both in the nervous system and muscle.37 These nutrients may contribute both to direct effects on muscles as well as to improvement in nervous system function:

• Omega-3 fatty acids, long recognized for their contribution to brain health, improve neuromuscular function as well. Higher levels and supplementation of omega-3s have been associated with improved muscle size and strength.38-40

• Creatine, an amino acid derivative important for cellular energy supply, appears to benefit both the nervous system and muscle. Recent studies have shown the potential of creatine to prevent loss of muscle mass and improve strength and endurance.37

• Increasingly common in older adults, low levels of vitamin D have been associated with decline of nervous system function and motor performance. Those individuals with higher levels demonstrate superior motor function compared to those with deficiency; and increased intake in deficient elderly adults results in improved strength and balance and a decreased risk of falls.37

• In addition to direct effects in muscle, HMB has been shown in laboratory research to prevent some age-related changes in nerve cell connections and promote the growth of new nerve branches.41,42 These studies may provide a clue to the mechanisms by which HMB supports healthy nervous system control of movement, helping to maintain functional connections in the nervous system and between nerves and muscle.

Combatting Some Underlying Factors of Sarcopenia

There are four primary factors that contribute to sarcopenia. Together, either HMB or vitamin D3 mitigate each of these underlying factors. Take a look:

→Vitamin D is a steroid hormone that supports both sex hormone synthesis and muscle contractile strength.31,32

As muscles break down, levels of pro-inflammatory markers rise. People with sarcopenia have higher levels of chronic inflammation than those with normal muscle mass.35

→Vitamin D3 has potent immunomodulatory properties and has been linked to improvements in inflammatory markers.35 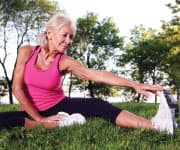 Sarcopenia is a leading contributor to frailty and early death in older adults.

Two supplements have been shown to combat sarcopenia by maintaining or boosting muscle mass and performance.

Supplementation with vitamin D3 has been shown to boost exercise performance and muscle strength.

These two nutrients are available in a combination powder suitable for convenient mixing in any drink of choice and taken once daily.